Common Particles and Their Sizes in Microns

Did you know?...The average home collects about 2 pounds of dust per week!

Particles are commonly measured in microns, a metric unit of measure.
There are 25,400 microns in one inch.
This dot (.) is approximately 1/64 of an inch wide and equals 615 microns.

- Visible particles constitute only about 10% of indoor air!

- Particle visibility depends on the eye itself. In other words, light intensity and quality, background and particle type.

- Particles on furniture and those in a shaft of light are approximately 50 microns or larger.

- It may be possible to see particles as small as 10 microns under favorable conditions.

- The majority of harmful particles are 3 microns or less in size.

- Particles of 1 micron or less adhere to surfaces by molecular adhesion. Scrubbing is generally the only way to remove them.

- Larger particles tend to settle out of the atmosphere due to weight.

- Smaller, "respirable" particles remain virtually suspended in the air until breathed in.

- Approximately 98-99% of all particles by count are in the size range of 5 microns or less. These particles tend to remain in suspension or settle out so slowly that only quality electronic air cleaners and HEPA air cleaners are effective in removing these particles.

- The average person breathes in about 16,000 quarts of air per day. Each quart contains some 70,000 visible and invisible particles. That's over a billion particles per day that our lungs have to filter out!

- The average home collects about 2 pounds of dust per week! 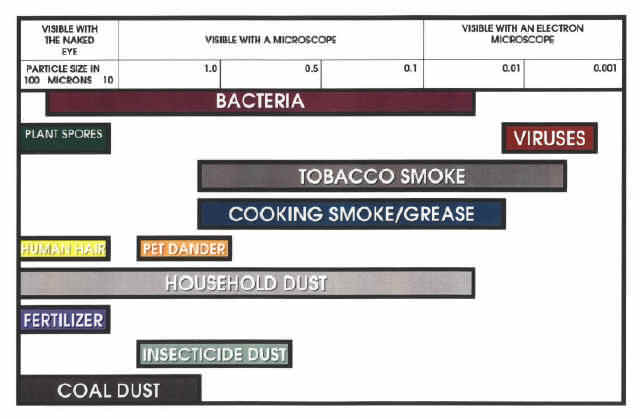 About Mold, Mold Facts     Why Chlorine Bleach is Not Effective in Killing Mold     Facts About Indoor Air Quality     How Photocatalytic Oxidation Works